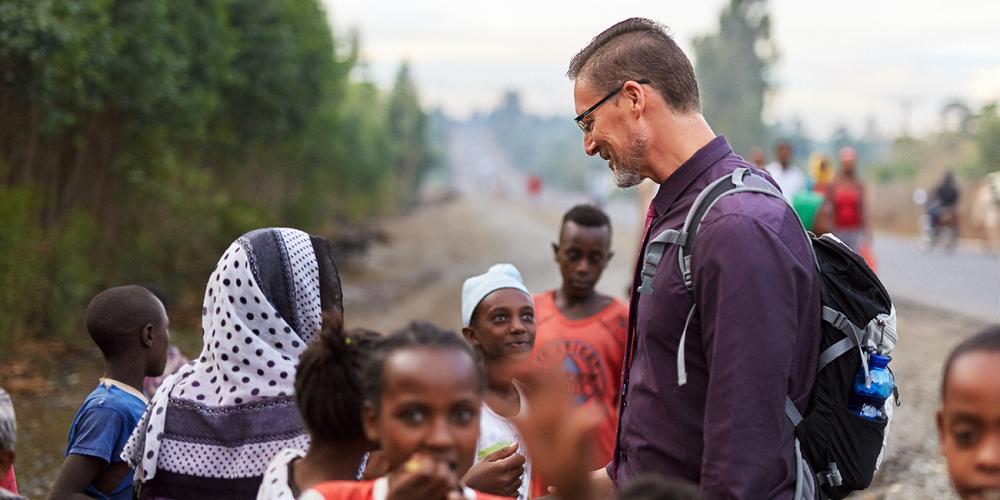 What if God didn’t stop the rain? The sermon would lose credibility.

But Ettienne McClintock, 51, wasn't taking anything for granted in Ethiopia.

The 3ABN Australia radio host was preaching in Shisho, a rural town located 20 miles (35 kilometers) from Awassa, the second-biggest city in Ethiopia, as part of 2019 Total Member Involvement meetings organized by the East-Central Africa Division. Electricity was intermittent, and he spent the first two nights presenting in the dark.

Despite the technical challenges, more than 400 people were attending the nightly outdoor meetings. The numbers were far bigger than the church could handle, and Ettienne was preaching from a makeshift shelter with plastic sheets for a roof. Little holes and tears covered the plastic sheets.

Ettienne was worried as he prepared for the third meeting on March 20. Although a rented generator provided power, rain began to fall just 30 minutes before opening time. He hoped people wouldn't be deterred from attending.

The rain stopped by the beginning of the meeting, but rain clouds darkened the sky. Ettienne was barely 15 minutes into his sermon when the rain began to fall again. As the downpour intensified, people left the church. Although Ettienne had some protection in his makeshift shelter, his audience was sitting in the open air.

"The church elders and I had prayed for the rain to stay away, and now the rain had come back," Ettienne recalled. "The weather was disrupting the program, and the people would not hear the message God had for them. We had to do something. But what?"

Suddenly it came to him. Every evening, he had been sharing about God's power over sickness, sin, and death. But God also had power over the weather. He could pray for the rain to stop. But what if God chose not to stop the rain? His message would lose credibility, and people might stop attending.

At that moment, 1 John 5:14 flashed into Ettienne’s mind: “Now this is the confidence that we have in Him, that if we ask anything according to His will, He hears us” (NKJV).

Through his interpreter, he invited the audience to pray with him. Then he prayed that God would stop the rain and keep the audience dry so they could hear the gospel.

Moments after he said, “Amen,” the rain stopped. It didn't rain again for the rest of the program.

After his sermon, about 200 people came to the front to ask for prayer.

“There were people kneeling everywhere,” Ettienne said. “As we knelt in the dirt, we prayed a prayer of thanksgiving and dedication to God.”

Ettienne, who lives in the Australian town of Kanwal and is a member of the Avondale Memorial Church, was among 220 international guests who joined Ethiopian speakers in presenting the gospel at hundreds of sites across the country. The East-Central Africa Division has been organizing Total Member Involvement meetings across its territory, starting with a three-week series that resulted in 110,000 baptisms in Rwanda in 2016. Ethiopia and South Sudan are the focus for the meetings in 2019.

Seeing half of the audience kneeling in prayer on the damp ground, Ettienne remembered his family and friends at home. He believed their constant prayers for him and the meetings also had been instrumental in stopping the rain.

“God gave me a new experience,” he said. “Up until that point in my life, I took low risks for God with low rewards. This was a high risk that made me feel uncomfortable and vulnerable, but the reward was amazing.”

​Stopped at the Airport I heard the only question that will be asked on Judgment Day.

No One Wanted Her A teenager sets a golden example in India, the Adventist Development and Relief Agency helps people in need, and another tasty international recipe from the Mission 360° Kitchen.