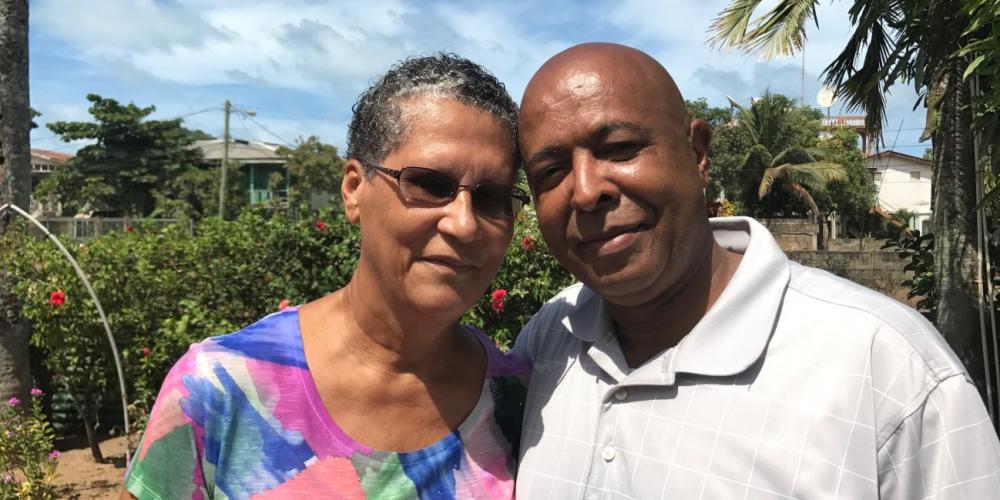 A Belizean Love Story About Friendship and Sabbath

They grew up in Belize, moved to the U.S., and fell in love with each other and Jesus upon returning home.

Married couple James and Louise Pescascio grew up as childhood friends in the Central American country of Belize.

As adults, they immigrated to the United States to work. Louise operated various businesses in California for 30 years. James worked as an engineer for Motorola in California, Texas, and Illinois.

As they neared retirement age, they both moved back to Belize, renewed acquaintances, and discovered that they both were single. James soon asked Louise out on a date. Louise had one question.

“Who is first in your life?” she asked James.“God,” he replied.

Louise was eager to tell James what she was learning about the Sabbath. James had news of his own. The two began to talk.

Louise first heard about the Sabbath at an evangelistic series in the United States, but she didn’t think much about it until she returned to Belize and opened a small hotel.

She began to study the Bible carefully. After reading about tithe, she started returning 10 percent of her income to God. After reading about sexual morality, she turned away unmarried couples who wanted rooms. Then she searched for information about the right day of worship. She wanted to keep going to church on Sunday, but she also wanted to obey the Bible.

“I searched the Bible for evidence that it was all right to keep Sunday,” she said in her home in Dangriga Town. “But the more I studied, the more the Lord showed me that the Sabbath was the true day of worship.”

Then Louise read Hebrews 4:4-11, which says that “God rested on the seventh day” and makes the appeal, “If you will hear His voice, do not harden your hearts” (NKJV).

“When I read that, I stopped and I said, ‘I have been asking God to show me if I can continue worshipping on Sunday and here it is!’” Louise said. “Now I had the proof.”

The knowledge presented a dilemma. Hotels are open seven days a week, and Louise didn’t know what to do. She placed Bibles and copies of Ellen White’s “Steps to Christ” in every room. She stopped doing laundry and other routine work on Sabbath. But she didn’t know if that was enough.

James, who was getting reacquainted with Louise after so many years, also didn’t know what to do. But he said that it was important to pray and to listen for God’s voice.

He told Louise that he once had been invited by his brother to go on a road trip from California to Belize. The night before their departure, he had stopped by a friend’s house and expressed his discomfort about going.

“Don’t go,” the friend said. “Listen to that internal voice.”

But James felt obligated to go because he had promised his brother. Later that evening, James’ car refused to start, and he had to be towed to his brother’s house.

“But I still didn’t want to listen to that voice that said, ‘Don’t go on this trip,’” James said.

The brothers left in the morning. Partway through Mexico, a tire blew as James was behind the wheel. The vehicle rolled over, and the brother was thrown out. James suffered serious injuries to his face and arms, and he spent two days in a Mexican hospital. Days later, in Belize, he started seeing double and had to rush to the United States for eye surgery.

The accident prompted a turn-around in James’ life.

“I started going back to church and turned back to God,” he said. “I realized that if I had listened to the voice, I wouldn’t have had that trouble.”

James and Louise realized that they both were seeking God’s will and decided to get married. They began going to church every Sabbath and grew increasingly convinced that they needed to leave the hotel business. But how?

“Then God did a very wonderful thing for us,” Louise said.

One day, Louise mentioned casually to a U.S. business client that she hadn’t taken a vacation in 20 years and really could use a break. The very next day, the client offered to take over the hotel.

Today, James, 62, and Louise, 65, praise God for giving them the Sabbath as a day of rest and worship every week.

“What happened with our business was nothing short of a miracle,” Louise said.

James and Louise Pescascio talking about the Holy Spirit and the Sabbath in their home in Dangriga Town, Belize. (Andrew McChesney / Adventist Mission)

Part of a 2015 Thirteenth Sabbath Offering went to Belize to help build an evangelism and conference center. Thank you for your mission offerings.

Why I Lead 5 Churches in China A 54-year-old woman shares her astounding path to Christ.