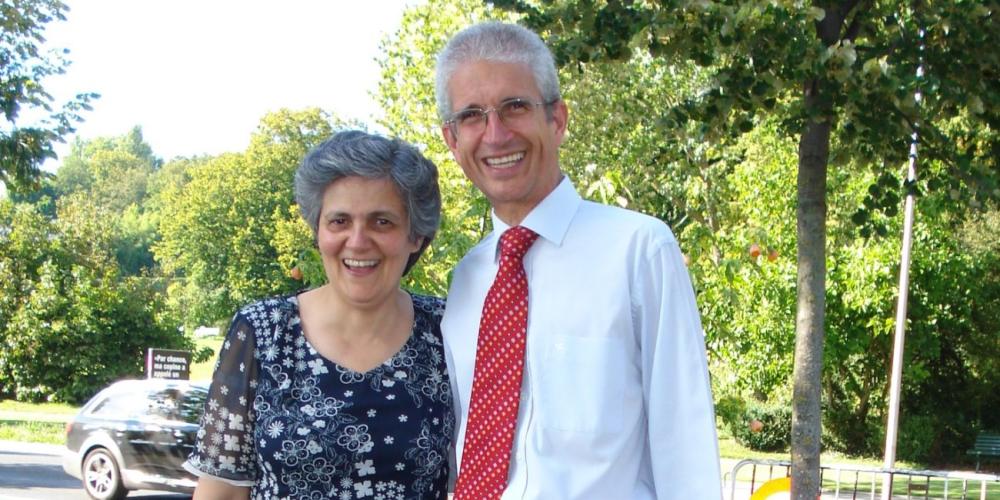 
One of the most perplexing questions that people ask is how to choose the right spouse.

For Mario Brito, president of the Seventh-day Adventist Church’s Inter-European Division, it was simple to find the perfect match: He asked God to answer two seemingly impossible prayer requests.

A mutual friend introduced Mario to his future wife, Maria, while they were studying at the Spanish Adventist Seminary (now Spanish Adventist College) in Sagunto, Spain. Mario was 22 and taking his second year of theology studies. Maria was 19 and in her first year.

Mario and Maria shared much in common. Both had grown up in Africa. Mario was born on the African island of Cape Verde and had lived there for 18 years before immigrating to Portugal in 1973. Maria’s Portuguese parents had lived in Angola for 27 years and moved to Portugal after Angola gained independence in 1975.

“I got to know my future wife, and we became good friends,” Mario said in an interview.

By the end of the school year, he was already wondering whether Maria might be his wife.

But the Spanish seminary only offered two years of studies, so Mario had to transfer to the Adventist University of France in Collonges, France, to complete his undergraduate theology degree. Maria stayed in Spain.

On the new campus, Mario quickly learned that the student body included eligible young women from a great number of countries, and many could be potential matches for dating. He and a male friend, also studying to become a pastor, discussed how to find a pastor’s wife, but each name that they raised didn’t seem quite right.

Mario longed to be a missionary in Africa.

“In my mind, it wouldn’t be easy if you had a wife who was complaining all the time,” he said. “Then you couldn’t accomplish the mission.”

While praying, he remembered Maria and had the strong impression that she might be the one. But he wasn’t completely certain, so he prayed, “God, if You see that Maria should be my wife, put it in her heart to write me a letter.”

To Mario, this was an impossible prayer request. At the time, a woman would never take the initiative in a relationship with a man.

“Lord, the normal thing would be for Maria to answer,” he said. “She wrote to me, and I’m sending a friendly reply. But if she is to be my wife, make it happen in such a way that she doesn’t answer. This will be the sign.”

Weeks passed, and no letter came. The two didn’t communicate again until the next school year when Maria moved to the Adventist University of France for her third year of studies. Soon, Mario and Maria were dating.

One day, Mario curiously asked Maria why she hadn’t answered his last letter.

“I felt it was a cold and very formal letter, so I decided not to answer,” Maria said.

The reply dumbfounded Mario. He couldn’t believe her description of the letter, and he asked whether she still had it. Maria retrieved the letter from her room, and the couple read it together. It was as warm and friendly as Mario had remembered.

“What was wrong with it so you didn’t answer?” Mario asked again.

Maria didn’t know what to say. She acknowledged that she couldn’t see anything in the letter that had prevented her from writing back.

Mario then told her about his two prayer requests.

Maria smiled broadly. “Now you have the explanation for why I didn’t answer!” she said.

For Mario, this was the confirmation that he needed to propose to Maria. The couple was married the next year.

Thirty-seven years later, Mario remains confident that he chose the right wife. While the couple has never worked as missionaries in Africa, they did serve as frontline missionaries planting churches in difficult, unreached areas of Portugal for more than a decade. Mario went on to become president of the Adventist Church in Portugal and, in 2015, he was elected president of the Inter-European Division, whose territory stretches from Portugal to Romania. Maria currently is fully involved in prayer ministry — visiting, counseling, and encouraging a Latino group at the Adventist church in Bern, Switzerland, where the division’s headquarters is located.

Mario and Maria’s home is also a mission field. They have raised a daughter, who is married to an Adventist pastor, and been the adoptive parents of 12 teenagers.

“Maria has a heart for mission,” Mario said. “Yes, I believe it was the right match.”

Growing Churches Journey 360 degrees around the world as we look at Seventh-day Adventist church planting!