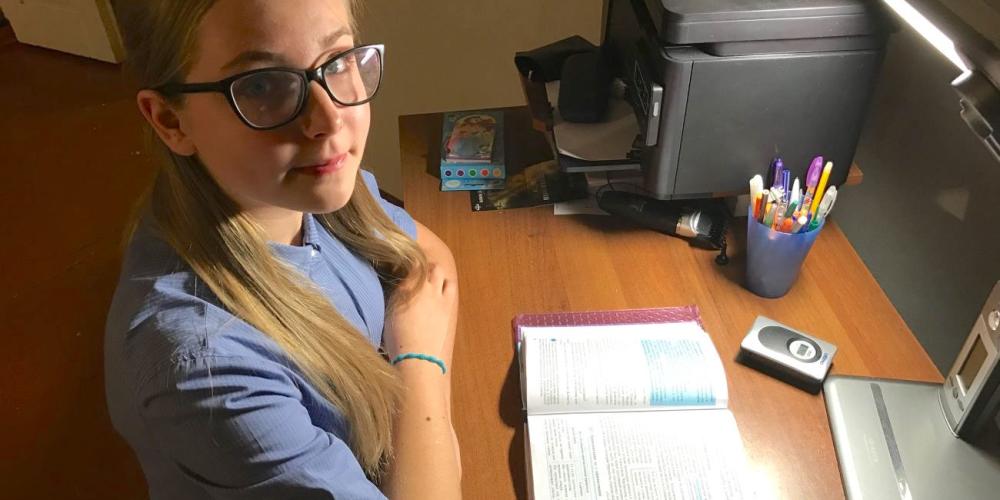 The seventh grader says God blesses those who obey Him.

Changing schools can be difficult, but middle-schooler Ellina Minina found it particularly challenging when she moved to northern Kazakhstan and learned that she had classes every Friday night and Saturday.

But Minina refused to compromise on her observance of the biblical seventh-day Sabbath, despite extra homework and strong pressure from the school principal. Then to Minina’s surprise, the principal abruptly backed down when the girl publicly stood for her Christian values at school.

“The most important thing is to pray and not be afraid of anything,” Minina, 13, said this week in an interview in her home in Pavlodar, a city of some 300,000 people located just south of the border from Russian Siberia.

Sabbath classes are a major issue for Seventh-day Adventist students in Kazakhstan, a former Soviet republic whose population of 17 million is predominantly Muslim, church leaders said. The Adventist Church has 3,500 members but no schools in the country. Public schools hold classes six days a week, Monday through Saturday, and students are placed into groups that study either in the morning or the afternoon.

Minina’s troubles started last year when her father, Adventist pastor Dmity Minin, moved to Pavlodar from Kazakhstan’s commercial capital, Almaty. Ellina Minina had received top marks at a gymnasium, a type of school with a strong emphasis on academic learning, in Almaty. But Pavlodar had only regular schools, and she quickly learned that the principal of her new school had no sympathy for Adventists. Minina was placed in a group of 28 sixth graders who studied from 2 p.m. to 8 p.m.

“The students were always quarreling,” Minina said. “It was hard to make friends in the class.”

Even more difficult was keeping the Sabbath. With the sun setting at 4 p.m. during the long winter months, Minina missed most classes on Fridays. She went to church instead of school on Saturdays.

Her father pleaded with the principal to transfer his daughter to the group that studied 8 a.m. to 2 p.m. Three other Adventist children studied in that group.

The principal said she would agree to the change if the father signed a pledge that his daughter would come to class on Saturdays, Dmity Minin said.

“Otherwise, don’t even dream about your daughter being moved to the other group,” the principal said, according to the father.

Despite the extra work from missing Sabbath classes, Minina excelled in her studies, her parents said. She also played volleyball and sang.

At the beginning of the 2016-17 school year, the principal announced that students with top marks would be allowed to transfer to the group of their choice. But Minina was kept in the same group for seventh grade.

Her father appealed to the principal again, saying his daughter was coming home too late at night. The principal rejected his request.

Then one of Minina’s classmates, a 13-year-old boy who lives with his grandmother, caused a disruption during physical education class. He took another student’s bag, pulled out gym clothes, and stomped on the bag on the floor. Then as Minina and 12 other classmates watched, he tossed the bag and the clothes out a window.

The principal was furious about the incident but didn’t know who to blame. So she called all 14 students from the physical education class into her office. Minina said she prayed when she was called.

“I was scared and wondered what I had done wrong,” she said. “In my seven years in school, I had never been called to the principal’s office. I prayed before I went in, and then I was not afraid anymore.”

Someone Who Doesn't Lie

Minina found her classmates in the office, and the principal began to ask questions.

“But no one wanted to talk because the boy was a bully,” Minina said.

The principal looked at Minina.

“I know someone who doesn’t lie,” the principal said. “That is Ellina. She is a Seventh-day Adventist and doesn’t lie.”

As her classmates listened, Minina told she told the principal everything that had happened.

“At first I was a little nervous, but then I thought, ‘What do I have to lose?’” she said.

Her mother, Anastasia Minina, said she was proud of her daughter for telling the truth.

“She was very courageous,” she said. “At this age, children are very scared, especially in front of bullies. But Ellina wasn’t scared and told the truth. She did good.”

A few days after the meeting in the principal’s office, the school closed for weeklong fall vacation. When Ellina Minina returned for classes, she learned that she had been moved to the morning group with the other three Adventist children.

“I was very happy,” she said. “Now I can come home after school and still have a whole day to finish my homework and do other things like take music lessons.”

She said God answers the prayers of those who are obedient to Him.

“It’s best not to waver because if you stay strong, God will help you to succeed,” she said.

A portion of the Thirteenth Sabbath Offering for fourth quarter 2017 will help fund the opening of the first Seventh-day Adventist preschool in Pavlodar, Kazakhstan.

‘It’s Easier to Carry Cocaine Than Christian Books Across the Border’ How prayer helped me bring a box of books into a closed country.

Prayer and Massage Open a Door in a Closed Country The mother saw the advertisement for massage therapy on Nikolai’s Facebook page.