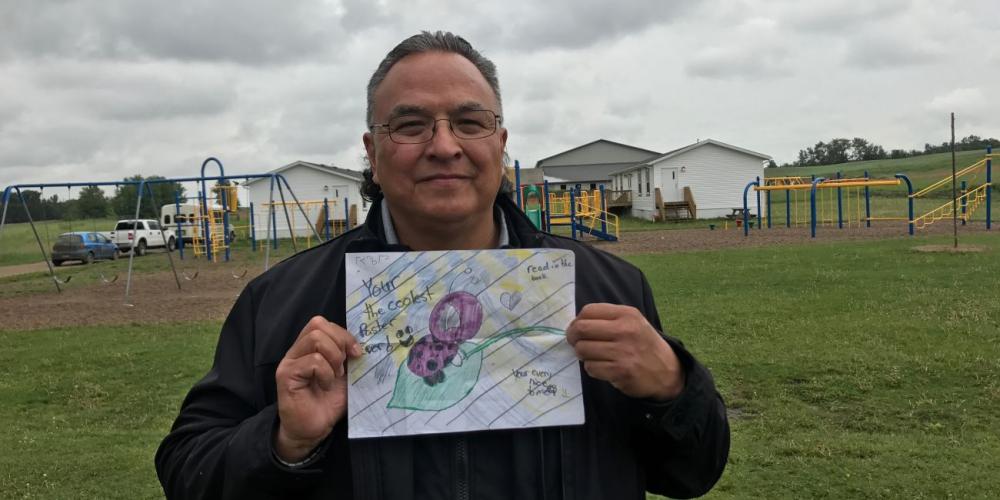 “She showed me that it’s not about me. It’s about what we can do for others,” says Daniel Guiboshe.

The new chaplain, Daniel Guiboshe, felt like an outsider when he arrived a month late for the school year at Mamawi Atosketan Native School in the Canadian province of Alberta.

The First Nations students and Seventh-day Adventist teachers already knew one another and were settled in. But one 11-year-old girl named Jojo Wolfe went out of her way to make Daniel feel welcome.

“During recess, she always tended to hang around me,” Daniel said. “She would cling onto me. I could never figure out why she did that. I just knew she did that a lot.”

The chaplain and young girl engaged in small talk about homework and friends on the playground. In the classroom, Daniel taught Jojo and her classmates about Jesus and the plan of redemption. The Adventist mission school is the first place that many students hear about Jesus.

One day, Jojo surprised Daniel with a drawing of a cute purple bug.

“Your the coolest pastor ever!” she wrote beside the hand-drawn picture. “Your every nice to me,” she added, making a few grammatical mistakes.

Several weeks later, Daniel received a phone call from the school principal. Jojo had died over the weekend. She had been goofing around with helium at a birthday party, making funny voices. Complaining of lightheadedness, she had gone to bed and never woken up.

“I was shocked,” Daniel said. “I just couldn’t believe it. I thought about the time that I had spent with her and wondered, ‘Why? Why now? Why did she have to pass away so young?’ I still don’t know why. That’s one of the things that we will have to wait on until Jesus’ return, I guess.”

The teachers and students grieved the loss, and school was closed for a day. 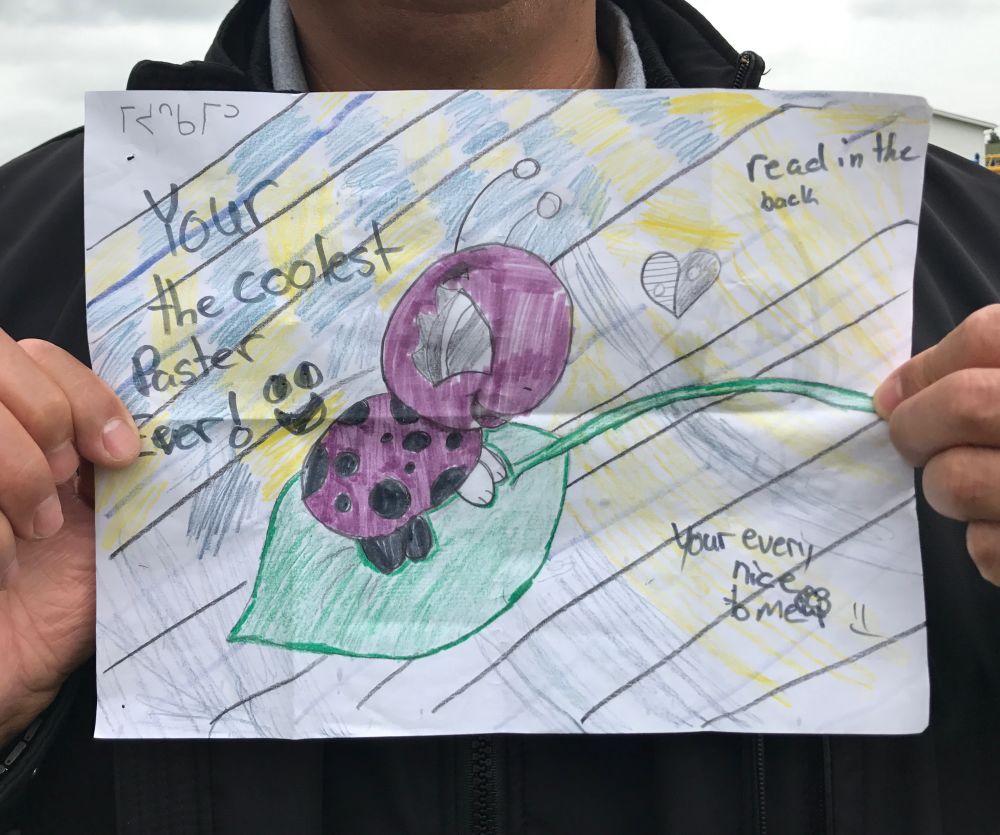 Jojo’s family organized a traditional three-day wake in a recreation hall on the First Nations reserve. People came from all over to eat, give speeches, comfort each other, and pay their respects at Jojo’s casket. Teachers and students attended the wake, and the teachers prepared food in the school kitchen and brought it to the recreation hall every day.

He said teachers and students came together as a family, reflecting the school’s name, Mamawi Atosketan, which means, “Working Together,” in the Cree language.

Today, Jojo’s hand-drawn picture hangs in Daniel’s office. It’s the first picture that he ever received from a student at the school.

“She made me feel at home when I got here,” said Daniel, 56. “I want to remember her and what she did for me. She showed me that it’s not about me. It’s about what we can do for others.”

When Daniel speaks to the children, he talks about what Jesus did for them and what they can do for others. He tells them his own experiences with Jesus. His main goal is to uplift Jesus and let the Holy Spirit do the rest.

“It’s like Jesus said, “And I, if I am lifted up from the earth, will draw all peoples to Myself,’” Daniel said. “I lift Jesus up, so the children will be drawn to Him.”

Part of the Thirteenth Sabbath Offering in second quarter 2018 will help the Mamawi Atosketan Native School expand its education program so it can teach more children about Jesus. Thank you for your mission offering.

Unlikely Gas Station Encounter Leads to Baptism in West Virginia John Peña’s coworker looked at him as if he had lost his senses. “You’re going to lose that money,” she said.