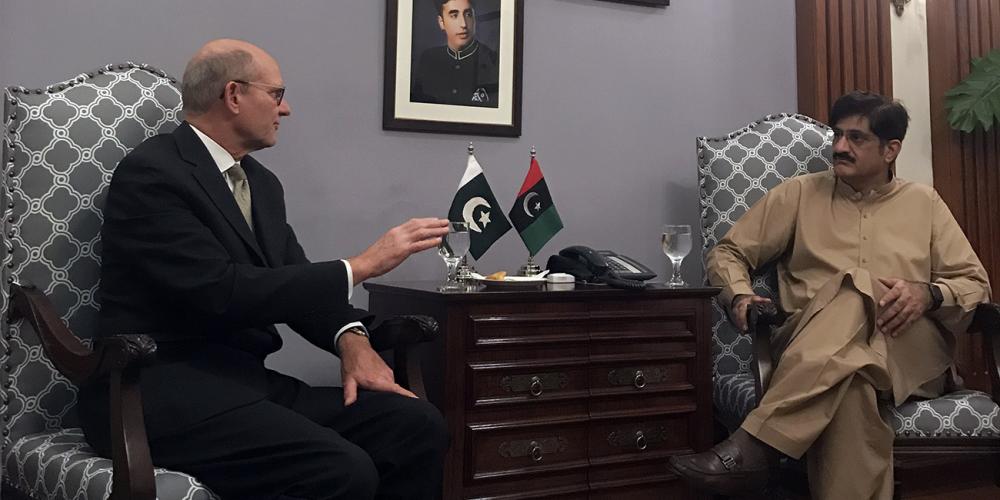 Seventh-day Adventist Church president Ted N.C. Wilson prayed and shared biblical advice with a powerful Pakistani leader even as he encouraged church members to shine as a light in Pakistan.

Wilson, making his first visit to Pakistan, and an accompanying delegation were warmly welcomed by the leader of Pakistan’s Sindh province to his ornate Chief Minister House in Karachi, the country’s largest city and commercial hub, on June 9.

Wilson thanked Chief Minister Syed Murad Ali Shah for the religious freedom that the authorities grant people of all faiths, and he highlighted the Adventist Church’s efforts to build society and relieve suffering through ADRA, Karachi Adventist Hospital, and Pakistan Adventist Seminary and College.

“We want to provide assistance in every way as we follow in the ministry of Christ,” Wilson said.

“I hope, your excellency, that Adventists — although we are small in number in comparison to the general population — are the very best citizens possible,” Wilson added, smiling. “If they are not, tell me.”

Shah, a graduate of Stanford University in the U.S. state of California, chuckled and expressed familiarity with the 138-bed Karachi Adventist Hospital, established in 1947.

The Adventist Church has about 13,000 members in Pakistan, a country of 204 million people.

Wilson asked Shah whether he could share some leadership advice from the Bible. With the chief minister’s consent, he recited Micah 6:8 from memory, saying, “What does the Lord require of you but to do justly, to love mercy, and to walk humbly with your God?”

“Your excellency, I would like to commend that to you,” Wilson said.

Motioning to an aide for assistance, Shah draped an Ajrak scarf over Wilson’s shoulders and placed a Sindhi cap on his head. The scarf and cap are the traditional attire of the Sindh people in Sindh province and are presented to guests of honor. Shah also gave scarves and caps to those accompanying Wilson on his visit, including Wilson’s wife, Nancy; Samuel Saw, president of the Southern Asia-Pacific Division, whose territory includes Pakistan; Adventist world church associate secretary Claude Richli; and Michael Ditta, president of the Adventist Church in Pakistan.

Wilson presented the chief minister with several gifts, including cakes and a rolled-up carpet.

“The carpet can represent a place of prayer to ask God to help you to walk humbly with Him,” Wilson said softly, adding, “Inshallah,” the Arabic word meaning, “God willing.”

An Offer to Pray

As the 15-minute meeting wrapped up, Wilson offered to pray for Shah and his work. Shah immediately agreed and requested a special prayer for Sindh province, which he has led since 2016 and is one of four provinces in Pakistan.

The closing prayer caught the attention of Pakistan’s main newspaper, Dawn, which published a 12-paragraph news report about the meeting on June 10.

“The president of the church also prayed for the prosperity and development of Pakistan, particularly Sindh and its people,” it said.

Wilson arrived in Pakistan on June 7 for a four-day visit meant to encourage church members in Karachi; in Lahore, where the church headquarters of the Pakistan Union Section is located; and at Pakistan Adventist Seminary and College, which was founded in 1920 and has 400 students. The college, one of 15 schools operated by the church in Pakistan, is located about 60 miles (100 kilometers) east of Lahore. He provided live updates and many photos from the trip on his Facebook page and on Twitter.

Speaking at an Adventist church in Lahore on June 7, Wilson urged church members to shine like a candle in Pakistan and the world.

Opening a Bible, he read Jesus’ words in Mark 16:15, “Go into all the world and preach the gospel to every creature” (NKJV).

“That means to every one of the 204 million people in Pakistan,” Wilson told 100 church leaders and others in attendance.

“You might say, ‘That is the work of the Pakistan Union,” he said. “But the Spirit of Prophecy tells us, ‘The work of God in this earth can never be finished until the men and women comprising our church membership rally to the work, and unite their efforts with those of ministers and church officers.’”

Wilson challenged church members to think carefully about how they spend time and where they focus their attention.

“Sometimes church members spend a lot of time writing angry emails to church leaders,” he said. “Sometimes they even go to court against the church. The devil loves that. He wants to distract Adventists from the mission of the church.”

No Angry Emails From Jesus

He noted that Jesus never sent an angry email.

“He died naked on the cross for you and for me,” he said. “And He tells us, ‘Follow Me.’ If He suffered, you might suffer. You might have trials. But don’t be part of the problem. Be part of the solution.”

“Don’t be distracted,” he said. “Shine like a candle for Jesus.”

Wilson also directed church members to focus on the church’s mission of proclaiming Jesus’ soon coming in speaking to a crowd of several thousand people for the Sabbath worship service at Pakistan Adventist Seminary and College on June 8 and to about 2,500 people gathered in an enormous white tent outside Karachi Adventist Hospital on the evening of June 9.

Many hands went up in the crowd when Wilson asked listeners to commit to keeping their eyes on Jesus and to sharing Him with others.

“You are the best sermon that can ever be preached in Karachi,” Wilson said. “God is calling you to be part of the wonderful proclamation that God has provided a way through Jesus for salvation. Jesus is coming soon to take us home.”

And a Teen Will Lead Them A teenage girl is instrumental in educating villagers about health. In India, programs set up by ADRA have been a huge benefit to the people.

Student Leads Many to Baptism in Gabon It all started when he spoke to a classmate about Jesus.