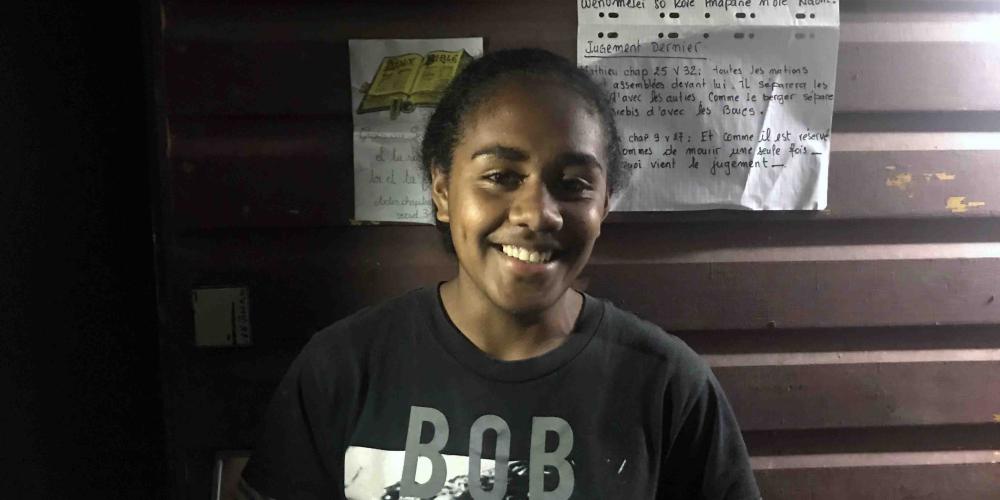 ​Saved by the Poke of a Finger

Catherine poked Father in the arm. Father drank every Sunday.

The airline representative at the airport check-in desk shook her head.

“I’m sorry, but you cannot board this airplane,” she said. “Your ticket isn’t for this flight.”

Sixteen-year-old Catherine Buama looked at her e-ticket. Sure enough, the date was for a flight next month. Father and Mother had purchased a ticket with the wrong date. Catherine looked at her parents standing nearby and wondered what to do. She had just finished spending a vacation at home on the small island of Maré in the South Pacific territory of New Caledonia. She needed to fly back to the main island to resume her high school studies.

Father spoke to the airline representative.

“Can you possibly allow her to fly today?” he asked.

But every seat on the plane was occupied, and the plane left without Catherine.

Catherine and her parents decided to spend the night near the airport and to try to get a seat on the airplane the next day.

At the meeting that evening, Catherine began to pay attention when the pastor spoke about alcohol.

“Alcohol destroys the body,” the pastor said. “You shouldn’t drink because the Bible says our body is the temple of the Holy Spirit.”

Catherine poked Father in the arm. Father drank every Sunday.

Father felt guilty when he received the poke. He knew that he shouldn’t drink. But he didn’t know what to say, so he smiled at Catherine.

Then the pastor spoke about smoking.

“Cigarettes destroy the body,” he said. “You shouldn’t smoke because the Bible says our body is the temple of the Holy Spirit.”

Catherine poked Mother in the arm. Mother smoked a pack of cigarettes every day.

Mother felt guilty. She knew that she shouldn’t smoke. But she didn’t know what to say, so she smiled at Catherine.

Then the pastor spoke about McDonald’s.

“The food at McDonald’s isn’t healthy, and it can make you ill,” he said.

Father and Mother poked Catherine. She liked Big Macs, and she ate at McDonald’s every weekend at school.

Catherine felt guilty. She knew that she shouldn’t eat at McDonald’s. But she didn’t know what to say, so she smiled at her parents.

Then the pastor spoke about music.

“Music is good, but it should praise God,” he said.

Then the pastor warned against playing bingo.

Father and Catherine poked Mother. She played bingo every Sunday.

The family left the meeting deep in thought about what they had heard.

The next morning, Catherine managed to get a seat on the airplane and flew off to high school.

Father and Mother decided to return to the evangelistic meeting that night. They also went the next night.

In the second week of the meetings, the pastor asked who wanted to give their hearts to Jesus. Mother stood up! Father and Mother were baptized on the last Sabbath of the meetings.

When Catherine returned home for vacation, she saw big changes in her parents. Father no longer drank or listened to rock music. Mother had quit smoking and playing bingo. Catherine liked her new home, and she decided to stop eating at McDonald’s.

Now Catherine worships at an Adventist church near her high school every Sabbath. Father, who prayed for 10 years for his wife to become an Adventist, is praying for Catherine to be baptized.

Father said he is happy that Jesus has freed this family from their addictions. Jesus said, “Whoever commits sin is a slave of sin. … [But] if the Son makes you free, you shall be free indeed.” (John 8:34, 36, NKJV).

“We were slaves to alcohol, tobacco, and McDonald’s,” Father said. “But now we are free!”

Part of a 2016 Thirteenth Sabbath Offering helped build two children’s Sabbath School classrooms on Maré, where this family lives. Thank you for your Sabbath School mission offerings that help other children — and adults — learn about God.

Getting a Best Friend Out of Bed on Sabbath Thirteen-year-old Dwight felt bad because his friend was missing Sabbath School and Pathfinders.