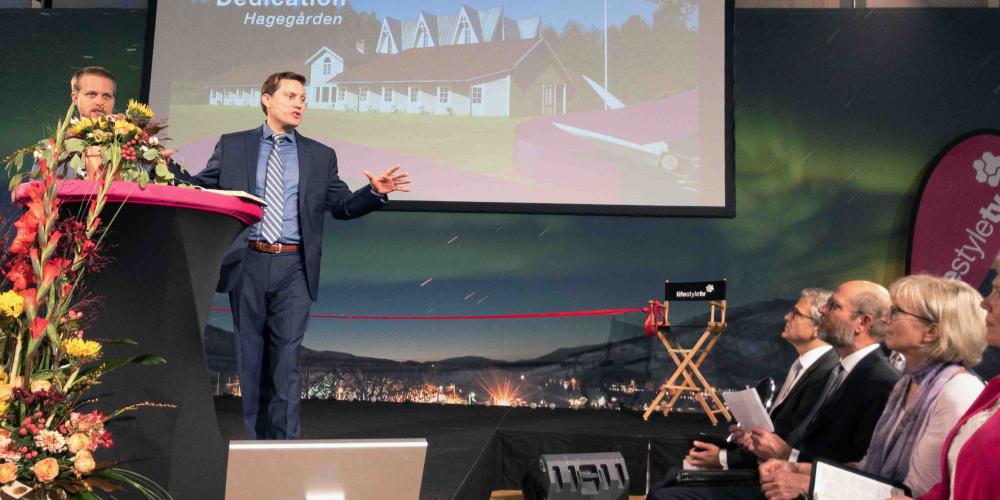 Seventh-day Adventist leaders joined several hundred guests in rural Sweden for the opening of a new headquarters for LifeStyleTV, a supporting media ministry, and to celebrate the remarkable story of how its Adventist founder turned an opera singer’s mansion into a television studio to proclaim Jesus’ soon coming to Scandinavia.

LifeStyleTV founder Claus Nybo described the new media center as a miracle from God in a stirring Sabbath morning presentation in a concert hall-turned-television studio in Brunskog, a Swedish town located about 110 miles (180 kilometers) east of Norway’s capital, Oslo.

“God has done something that we couldn’t even imagine,” Nybo told about 300 gathered guests, including Adventist Church president Ted N.C. Wilson, division and union leaders, Hope Channel and 3ABN executives, and donors. “We thought we would build a new studio where we were.”

Instead, he said, LifeStyleTV received a mansion worth seven times more than its construction budget.

Church leaders, many of whom spent Friday night in the mansion’s luxury guestrooms, voiced astonishment at the story and offered praise to God.

“I’m so impressed with what you have here, what God has done here,” Wilson said during his Sabbath sermon. “God had His eye on this the whole time.”

“We have a God of miracles,” said Raafat Kamal, president of the Trans-European Division, whose territory includes Sweden.

Origins of a Miracle

The miracle began when Nybo and his team began praying in 2011. They asked God to give LifeStyleTV a bigger studio to replace its cramped makeshift studio in the southern Swedish town of Hörby, where it had been airing lifestyle-focused and Bible-based programming around the clock on satellite for five years.

By 2015, LifeStyleTV managed to obtain half the funds needed to construct a larger building. Then nothing progressed further.

Blueprints for the new building were drafted and redrafted. The amount of money on hand required a studio that was too small for the equipment. But plans for a larger studio cost too much.

Finally, Nybo received a building permit and decided to step out in faith. He organized a groundbreaking ceremony for the new building on Nov. 5, 2017. The plan was to open the new building in early September 2018.

It rained heavily on Nov. 5, and the ceremony was held in rubber boots and under umbrellas.

Unexpectedly, the ceremony resulted in a surge of donations.

“That step in faith inspired other people, and we raised the rest of the money to build in one month,” Nybo said.

But the rain continued throughout the rest of the month and December, making it impossible to start work on the foundation.

While waiting, the LifestyleTV team looked online for other options and found a mansion built by an opera singer on sale. Several team members wanted to inspect the property in Brunskog, located about 310 miles (500 kilometers) to the north. But others argued that there was no need to visit because all plans were in place to construct at the current location.

Moments later, the owner pulled up in his car, took one look at Theresa Nybo, and exclaimed, “Where have I met you?”

The two had never met.

It turned out that the owner had been watching LifeStyleTV and recognized her from a cooking program that she hosts.

“This meeting has to be providential!” the owner said.

Nybo prayed about what to do. He sought the advice of Wilson, Kamal, and Robert Sjolander, president, Swedish Union of Churches Conference. He asked major donors whether they would mind if he bought the mansion instead of constructing the new studio.

“The response was beyond anything we could imagine,” he said.“The excitement in their eyes and [people] saying, ‘We will help. We are going to secure this together.’”

LifeStyleTV opened its new headquarters in the mansion on Sabbath, Sept. 8 — in early September just as Nybo had announced at the groundbreaking ceremony in November 2017. But instead of moving into a new building, it moved into a mansion that far exceeded everyone’s dreams, Nybo said.

“If there is anything that I have learned from LifeStyleTV, it is that God wants us to dream big but start with what we have,” he said.

Video report from the Trans-European Division about the Sept. 8, 2018, opening of LifeStyleTV’s new headquarters in Sweden.