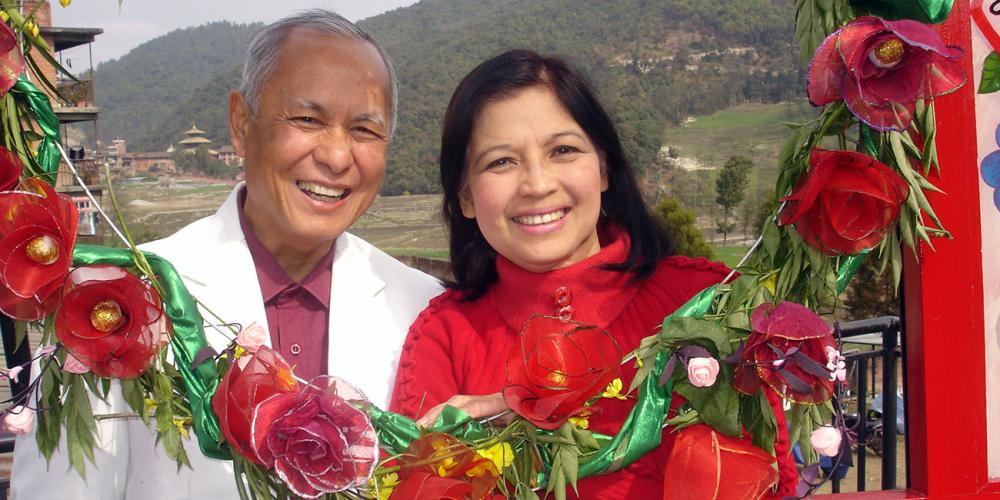 Filipino physician passes away after 25 years of mission service in Zambia, Botswana, Nepal, and Cameroon.

A Filipino physician has become the first Seventh-day Adventist missionary in active service to die of COVID-19 after contracting the virus in the Central African country of Cameroon.

Dr. Manuel Bellosillo, whose 25 years of mission work also took him to Zambia, Botswanaand Nepal, fell ill with malaria at a remote hospital in Cameroon and then, in his weakened condition, succumbed to COVID-19. He was 67, and he and his wife, Elma, were only months from finishing a six-year mission term at the hospital.

“We praise the name of the Lord for missionaries like Dr. Manuel Bellosillo,” said German Lust, co-director of the Adventist world church’s missionary program, IPRS, at the General Conference headquarters in Silver Spring in the U.S. state of Maryland. “Dr. Bellosillo was an example of professionalism and care who was always willing to go the second mile to serve others. May his life inspire others to serve God.”

Family members remembered Dr. Bellosillo as “a God-fearing man and a hard worker who lived his life to serve others.”

“The number of people he helped throughout his years of service, directly or indirectly, is vast,” the family said in a statement. “Only God knows the exact quantity of people … touched.”

Manuel Beldia Bellosillo was born on Feb. 18, 1953, to elementary teachers Silvester Burata Bellosillo Sr. and Victoria B. Bellosillo in Pontevedra, a coastal town in the central Capiz province, located about 375 miles (600 kilometers) south of the Philippines capital, Manila. The eldest of five children, he accepted responsibilities seriously from a young age, looking after his siblings and helping to run a laundry and egg-delivery service to bring in additional income for the family.

After obtaining an undergraduate degree in biology, he was accepted into the doctor of medicine program at South Western University in Cebu City, Philippines. There, he faced challenges with what became a trademark resolve. He kept personal expenses at a minimum to cover tuition costs. Some weeks, his meals consisted of soup made from a single bouillon cube and occasionally supplemented with a boiled egg. Similarly, he could not afford textbooks, so he borrowed them from classmates. During vacations, he borrowed textbooks so he could study ahead for upcoming classes. Family members said God gave him an exceptional memory that enabled him to retain enough of what he read to obtain good grades even without full access to all of the required textbooks.

This habit of using the most of God-given opportunities followed Dr. Bellosillo in his career. During missionary furloughs back to the Philippines, he immersed himself in medical studies for a month at a time at Adventist Medical Center Manila. One year he focused on surgery; another on ophthalmology; and so on. In this way, he gained expertise to better serve patients in the mission field.

In his early post-graduate years, Dr. Bellosillo worked at Adventist Hospital–Calbayog in Calbayog City in the Philippine province of Samar, where he met and later married his wife, Elma, a medical technician and accountant. Then he served at Adventist Hospital Palawan in Puerto Princesa in the Philippine province of Palawan. After being confirmed by the Philippine Academy of Family Physicians as a certified family physician in February 1994, he and his family accepted a mission call to Africa.

During their 11 years in Zambia, the family had no television, cell-phone reception, or Internet access at Yuka Adventist Hospital, located about 550 miles (990 kilometers) east of the national capital, Lusaka, and serving a surrounding village of small mud-and-straw houses. The local radio station was their only source of information. But the isolation enabled the family to focus more closely on the people whom they served and to make many friendships.

Dr. Bellosillo worked long hours and often was on call around the clock, especially during the years when he served as the only doctor in the hospital. At times, he slept next to a landline phone in the family’s living room so he could quickly answer calls to return to the hospital. Still, he and his family fondly remembered their time there because of the many friends they made. Dr. Bellosillo had expressed a desire to return for another term before retirement.

Regardless of where he worked, Dr. Bellosillo encouraged patients to read the Bible and be prepared for Jesus’ soon coming, family said. He also served as a church elder and a Sabbath School teacher and organized outreach programs.

Dr. Bellosillo contracted malaria in early May 2020 and again a second time in late May. A subsequent medical test on June 7 showed that he also had COVID-19. He passed away on June 17.

Church leaders said Dr. Bellosillo’s life of service and sacrifice was an inspiration both to those who knew him and to those who wish to become missionaries.

“Both Dr. and Mrs. Bellosillo dedicated their lives as missionary doctors for God, with over a quarter century of sacrificial service, ministering to the sick and infirmed, meeting their physical needs while at the same time, pointing their patients to the One who can heal them spiritually,” said Kevin Costello, director of the missionary department at the Seventh-day Adventist Church’s Southern Asia-Pacific Division based in Silang, Cavite, Philippines.

“The Adventist Church is very grateful for the dedicated service of Dr. Manuel, and we are deeply moved by the ultimate sacrifice of his life while in service of the Master,” he said.

“One thing is for sure: His legacy of service and God-fearing life will carry on in his family,” the family statement said. “With aching hearts we will continue his legacy by serving others, and working hard in each of our respective fields, and most importantly making God our partner in every decision and action we do until we are reunited with our father on that resurrection morning.”

A celebration-of-life memorial service will be hosted by the Southern Asia-Pacific Division on Aug. 16.

Dr. Manuel Bellosillo is survived by his wife, Elma; two daughters, Femae Love Plaza Bellosillo and Illoza Joy P. Bellosillo-Palacol, both physicians at Palawan Adventist Hospital, and a son, Leomel Jezter Plaza Bellosillo, a laboratory scientist with a master’s degree in public health. The Bellosillos’ first grandchild was expected to be born to Illoza and her husband, Ryan, in August 2020.

The Church Crushed My House When a friend asked me for a ride, something impressed me that I should bring my family along. While we were driving, a strong storm started that caused our wooden church building to collapse on top of my house!

Flooding the Amazon with Hope Thanks to your past contributions to the 13th Sabbath Offering, the Floating Church was built to serve the Amazon! There are entire communities with either no knowledge of the Bible or no churches.