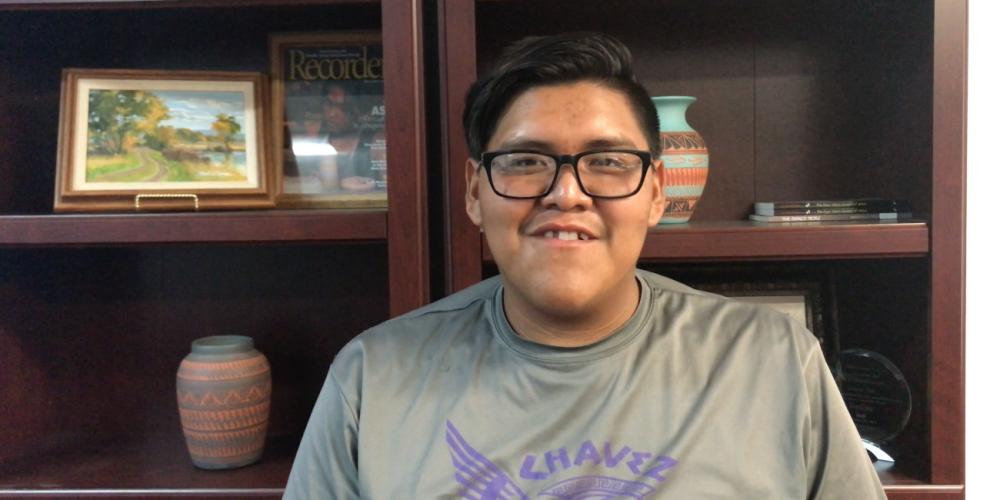 But then Adrian Wiles learns about Jesus and is baptized.


Adrian Wiles didn’t want to live at Holbrook Seventh-day Adventist Indian School when he arrived to attend third grade at the age of 8.

But some adults thought it would be good for him to move to the boarding school in the U.S. state of Arizona and spend some time away from the reservation.

Adrian had a hard life at home. He had never met his father, and his mother often drank. Sometimes his mother locked him out of the house and he slept with the family dogs under the front porch. When Adrian was 7, his older brother taught him how to drink alcohol and smoke marijuana.

Adrian didn’t think anything was wrong with his life, and he didn’t want to move to the school — even though three cousins already studied there.

On his first night in the dormitory, his mother tucked him in bed and sat with him until he began to fall asleep. When she left the room, he jumped out of bed and ran after her. He caught up with her in the hallway and, crying, grabbed her by an ankle.

Mother sternly told him to go back to his room. “Stop being a big old baby,” she said.

Adrian wailed and refused to let go of her ankle. Finally, his cousins picked him up and carried him back to his room. He cried even more as he looked out the window and saw his mother drive off into the night.

His cousins showed scant sympathy. He was creating a scene, and they didn’t like that. “Stop crying,” said one cousin. “Stop being a big baby,” said another.

With no one to comfort him, Adrian looked around his room and noticed for the first time that his new roommate, Kobe, was also crying. Kobe was also in the third grade and this was his first night away from home. The two boys cried together as they fell asleep.

Adrian cried every night for a month. He missed his family and his old way of life. Everything was new at the school, and he couldn’t understand why the teachers and many students were so friendly.

“I had a hard time adjusting to people being friendly to me,” he said in an interview. “I came from a broken-down home where people are kind of mean.”

After a few weeks, the school pastor asked Adrian and Kobe to lead a worship service. Adrian felt nervous about standing in front of the other 65 students, but he got up and spoke about his home. He said he didn’t know his father, and his mother and brothers drank. He said he hardly remembered the date of his birthday because his family had never celebrated it. When he finished speaking, he felt a whole lot better about being at the school.

“Talking about this let the other kids know about the atmosphere where I came from and helped me relax,” he said.

The school taught Adrian many new things. He learned that it’s important to take baths and to wash his clothes. He stopped drinking and using drugs. He found that playing basketball at the gym helped cheer him up when he felt sad.

The boy returned to the school for fourth grade, fifth grade, and sixth grade. In the seventh grade, he studied the Bible with the pastor and decided that he wanted to give his heart to Jesus.

“The pastor told me who God is and taught me how to pray,” he said. “I wanted to be baptized to make a public statement about my commitment to Jesus.”

After the baptism, his mother and brothers made fun of him for becoming a Christian. They teased him for refusing to eat pork and other unclean meat. They didn’t understand why he kept offering to help do chores around the house.

But after a while, they began to see that he was sincere in his new beliefs and had really changed from the old Adrian. One day his mother said, “We are glad that you are changing and you are getting an education.” Her words thrilled Adrian! His mother had never gone to school after eighth grade.

Today, Adrian, 18, is in the 12th grade and is excited that five of his younger cousins are attending the school for the first time. He prayed all summer that his cousins — who are in the first through ninth grades — would be able to come, and he said God answered his prayer.

His youngest cousin, a first-grade boy, wasn’t happy when he arrived at the school last week. That first night in the dormitory, he cried and cried and asked to return home. Adrian did something that nobody did for him. He went to his little cousin’s room and comforted him.

“Try not to think about it,” he told the boy. “I was in your spot when I was small. You’ll get used to it.”

Adrian no longer cries about home, but he does think about a new home — the place where he will live with Jesus one day. He can’t wait!

Part of the Thirteenth Sabbath Offering in second quarter 2018 will help Holbrook Seventh-day Adventist Indian School build a new gym to replace the current structure, which is falling apart, with uneven floors and insulation protruding from numerous spots in the ceiling. Adrian said he feels embarrassed about what visitors must think about his new faith when they come to the gym for community events. He said the new gym is also needed so more students will be able to cheer themselves up by playing basketball when they feel sad. Thank you for your mission offerings.

Injured and Down, Missionary Starts a Joy Journal Marshall Islands teacher Elisa Albertsen tries to find good in all situations.

August 26 - Deep in the Valley Deep in the jungles of Malaysia, a small church sits on top of a hill overlooking a valley. Find out how a Global Mission pioneer is reaching this far corner of the earth.